After spending 11 seasons at Manchester City, Vincent Kompany left the Etihad and moved to Anderlecht in the summer.

Having completed over a decade with the Premier League winners, the 33-year-old had a testimonial on Wednesday and admitted it was the ‘greatest gift’ anyone could receive at this stage of their playing career.

The defender arrived in England in 2008 after City signed him from German side Hamburg.

Belgian newspaper Het Belang van Limburg had an opportunity to interview the centre-back. During the course of the chat, he spoke about various topics, including his life before joining the English champions and also about his 11 year spell with them.

When Kompany was asked about his first memory of Manchester. He said, “That was when I met my wife Carla. I immediately thought it was a nice place with friendly people.”

“When I signed with City, I immediately knew that this was a place where I could become successful. In my first game against West Ham I was elected Man of the Match. Since then I have always been happy here, both in my football and in my private life.”

The player’s wife is a lifelong Manchester City fan and HBVL asked Kompany if he joined City because he’s met Carla or if was it the other way around. 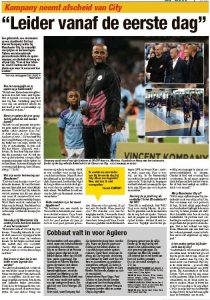 To which he replied: “I knew Carla before I came to City. Coincidentally, I signed for the club for which she supported and, in the city, where she came from.

“In the beginning it was more a disadvantage than an advantage. (laughs) It was all pure coincidence, like so many things in my career.”

That extra pressure from his wife and her Manchester City supporting family certainly didn’t do any harm.