There’s been a couple of updates in Italy about Monchi and his potential move to Arsenal over the past two days, so here they are.

The first came from Il Messaggero on Sunday, who stated the Gunners had ‘presented their offer’ to the Spanish director of football, wanting him to become their new technical director at the Emirates.

In order to free himself from his contract at AS Roma, Monchi would have to pay a €2m release clause, which Arsenal would fund.

They reportedly face competition from Sevilla, who want to make their former director of football their new president. 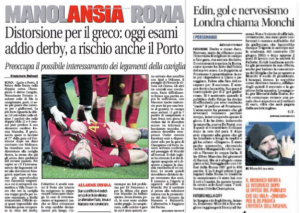 The second is from Leggo on Monday, who seem to have an update on Il Messaggero’s, as they claim Monchi has now said ‘yes’ to Arsenal’s offer, with the Gunners ready to pay his release clause.

According to them, the fee would be €3m instead of €2m, but, at this point, that’s not really the issue, as we all know the London club can pay either.

Everything points towards Arsenal getting their man at the end of the season, but, as we all know, many things can happen over the space of four months, and someone could come along with a better offer.

It’s not done until it’s done.