Once again, Saturday’s edition of L’Equipe is packed full of potential AS Monaco transfers.

Manchester City get a mention for several players. We’ll leave the Kylian Mbappe circus to one side, because nothing seems to be really happening, and City are only mentioned in passing with Fabinho, it’s for Benjamin Mendy that things seem to be moving forward.

Liverpool, clearly not being too fussed about tapping up accusations, have spoken to Mendy via Jurgen Klopp, report L’Equipe. But Manchester City, who appear to do tapping up in a way which doesn’t annoy selling clubs so much, have done it better.

Pep Guardiola has explained to the fullback how he sees him, his best bits and the parts needing some improvement. Manchester City’s manager has explained a clear path for Mendy and a route for his development which has led the player to say ‘yes’ to 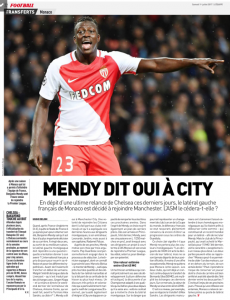 Mendy isn’t a player Monaco want to sell this summer, they’d rather the 22 year old sticks around for another season. Whilst the fullback would normally be valued at €40-45m, Monaco will only sell for something ‘exceptional’.

Manchester City know what they have to do.