It’s not even a rumour anymore: Henrikh Mkhitaryan wants to stay at AS Roma.

The Armenia international has spent the current season on loan with the Serie A side, where he has quickly become a favourite of their manager, Paulo Fonseca, and despite suffering a couple of injuries, everyone seems happy.

The problem is the financial aspect of it all, as Mkhitaryan is on high wages at Arsenal, meaning any move seeing him stay in Italy’s capital would need him to lower his salary.

He has already agreed to do that, but Corriere dello Sport state he would find it ‘hard to accept anything lower than €4.5-5m/year’ since he could get that in Russia, from where he has already received offers.

AS Roma can reach €3m + bonuses, and now it’s up to Mino Raiola to find a way to make up the difference.

That’s why there is now talk that Arsenal could get a player as part of the deal, replacing Mkhitaryan in the process by acquiring someone younger: Justin Kluivert.

The idea stems from the fact both the Dutchman and the Armenian are represented by Mino Raiola, and Corriere dello Sport suggest that a transfer seeing the Premier League club paying money and inserting their player for the 21-year-old could be the answer to all the problems. 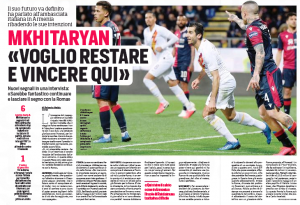 That would save AS Roma having to pay any cash for Mkhitaryan, and they would get a bit more on top of that.

The numbers suggested by the newspaper are along the lines of the Armenian + €12-15m for Kluivert, which seems rather reasonable.

Prior to the Covid-19 pandemic, the winger had scored seven goals and assisted another two in 27 appearances in all competitions.

Quite a decent output and certainly a player who has a bright future ahead of him, which is exactly the kind of footballer Arsenal enjoy having around their squad.