Georginio Wijnaldum isn’t having the best week of his career. Having left Liverpool for PSG, the midfielder granted a long interview to L’Equipe earlier this week, detailing the competition to sign him in the summer.

The Dutchman said that there’d been talks with Barcelona and Bayern Munich, before he decided to sign for PSG as a free agent. He’s also spoken about issues behind the scenes at Liverpool, clearly frustrated with whoever dealt with his potential contract renewal.

There’s been suggestions that Liverpool didn’t want to give the midfielder the type of contract he was looking for, with the Reds perhaps reluctant to had a long and bumper deal to a 30-year-old.

Such a stance has now been backed up, from someone said to be close to the player.

Wijnaldum was disappointing for PSG as the club drew 1-1 with Club Brugge in the Champions League this week. Subsequently, Friday’s edition of L’Equipe has an article on his struggles so far with the French side.

They publish quotes from an unnamed ‘close friend’, who doubts the wisdom of handing the player the deal he got: “Signing him for three years was a mistake. He is 30-years-old but he started very young (at 16 as a professional) and he’s worn out, his best is behind him.” 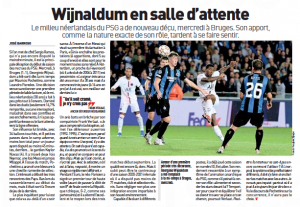 That’s not the view of everyone, but there is clear frustration in Paris at Wijnaldum’s failure to impress since arriving from Liverpool.

And it’s he, rather than his more famous colleagues, who is the subject of greatest scrutiny right now.