Aleksandr Golovin’s good displays for Russia at the World Cup threw him right into the transfer rumour mill, but there was a very particular taste to the claims.

Chelsea and AS Monaco were the clubs linked and it was abundantly clear that was because of the Russian connection at both clubs. Whether there was genuine interest from either it was destined that both would be linked until the player eventually left CSKA Moscow.

Those links weren’t all fabricated, as Golovin signed for AS Monaco and a lot was expected of the transfer. So far he hasn’t been able to live up to the hype, which is at least partly down to his new club struggling with their start to the current season.

L’Equipe have spoken to Russian journalist Yaroslav Susov and asked him for his take on why Golovin isn’t shining so far. 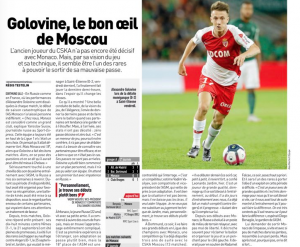 Susov was straight with the French newspaper, and perhaps came out with an opinion they weren’t quite expecting: “This team has always been at the top of Ligue 1 and it was a good choice. We thought he was going to start strong. But Monaco is 18th, while Golovin played good matches. So, we ask ourselves questions and we think that it might have been better in Chelsea.”

How serious Chelsea interest actually was hasn’t been clear, but in Russia they clearly think there was something in it.