After spending two seasons at Lyon, Pape Cheikh Diop returned to Celta Vigo on loan last summer. The La Liga side have an option to make his transfer permanent after this season.

The midfielder has made only five starts in the league this season and has drawn attention from the likes of Brentford, West Ham United and Strasbourg.

On January 25th, AS reported the 22-year-old had received an offer from the Hammers. The operation would include Lyon terminating his loan deal with Celta and then allowing him to join David Moyes’ side on a temporary deal.

The Bees also tried to sign the Senegal-born Spain U21 international, but Friday’s edition of Spanish newspaper AS explains Cheikh Diop trained with the first team on Thursday after his departure to Brentford failed. 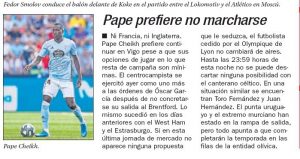 The report adds the ‘same happened’ with West Ham and Strasbourg in the past few days.

Even though the midfielder is aware his playing time will be limited, he wants to continue at Celta.

Man City pursuing player with a ‘mad and suffocating pressing’ –...