Moussa Sissoko may not be Juventus’ priority for the final week of the transfer window, but the Tottenham Hotspur player is still not ruled out by the Italian side.

As reported in the past few days, the Old Lady only have the Tottenham midfielder in mind in case they fail to land André Gomes and Kevin Strootman.

It’s Tuttosport who has been following the story, and first they said there was a 15% chance Juve would attempt to sign Sissoko. Then they claimed he would only be a ‘last minute option’. 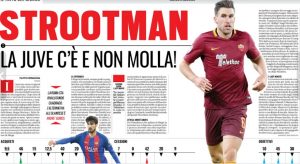 And this last minute option seems to be well defined, because he’s mentioned once again today, this time with a few more details.

They say Mauricio Pochettino is letting the player go on a loan deal, and doesn’t care if it’s a simple spell or with an option to buy. Tuttosport claim Sissoko’s bags are already packed.

But as you can see in the picture, Gomes and Strootman are still in the spotlight, with Sissoko and Renato Sanches getting a discreet mention in the last paragraph. So the chances of a deal Tottenham are still very little, despite not leaving the table.

And whilst Pochettino may not care about the details of a loan, Daniel Levy probably does.