Although it’s been a while since Tottenham Hotspur started being linked to Hector Herrera from Porto, Spurs interest is never the main subject of the stories coming from Portugal.

There’s always a big article about the midfielder’s situation, and then they just include a list of interested clubs, with the London side often among them.

That’s what happens today, as Jornal de Notícias reports the chances Herrera has to sign a new contract with the Dragons.

The outlet claims that the player’s agent Gabriel Moraes is set to meet Porto for new discussions soon.

They’re said to be demanding €6m gross per season, which is a lot for Porto to pay. 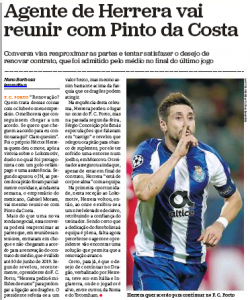 Herrera said in an interview this week that his wish is to stay at Porto, and Jornal de Notícias says that these quotes made some ‘echoes’ in Italy and England, where ‘he’s wanted by Roma and Tottenham’.

But other local outlets are not so confident of his renewal. Newspaper Record writes that he could find an agreement just so he wouldn’t leave for free at the end of the season.

The plan would be to sign a new contract – not as big as the one he’s demanding – just so Porto can sell him for a reasonable value in the summer.

But that’s just one of the possibilities on the table.