Towards the very end of the transfer window, with less than 24 hours left, Wolverhampton apparently came forward for Milan’s Franck Kessie.

Numerous reports emerged that an offer had been made by the Premier League side for the Ivory Coast international, but, much like the early days of their attempts to sign Patrick Cutrone (who eventually moved to Molineux), the player wasn’t that excited at the prospect.

Without the time needed to change his mind, a transfer never materialised, and Corriere dello Sport give a bit more details as to why.

According to the Italian newspaper, the player wasn’t pleased at the contract Wolves put in front of him, deeming the €2.6m/year salary insufficient compared to his €4m/year demands (£71k/week or so). 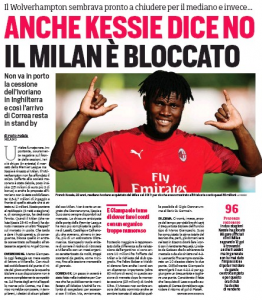 With these figures being post tax, it’s perhaps understandable why Nuno Espirito Santo’s side never pursued it further, leaving Milan with a player they wouldn’t mind selling.

The offer, fitting previous reports, is stated to have been of €25m + €3m in bonuses, which is an amount the Serie A side could have used in their hunt for Atlético Madrid’s Angel Correa.

They’ll just have to do with the Cutrone money for now.