Portuguese newspaper Record had a front page story with Adrien Silva at the weekend, who’s given them a four-page interview.

Even though the midfielder had a solid career at Sporting, which was the main topic of the interview, they started the chat talking about his move to Leicester City, which happened in the summer of 2017.

Due to a delay in the exchange of documents, the transfer couldn’t be registered as a summer move, so even though Adrien changed clubs, he was only allowed to play for the Foxes in January 2018.

“From the moment I started that way, it’s always harder. You start with a huge disadvantage,” Adrien Silva told Record. “As I said, the level is different, the competition is different and when you miss the train, as with me, it’s complicated. It’s six months and that’s a long time for a player.

“But I didn’t lower my head. My dream was really to play in this league. I did everything for that and got it. After this very difficult period when I was without playing, I still made 16 games. For me it was a great victory, because the level of experience was the best I had.

“It was important to test my character, my ambition, because I really wanted to go to the World Cup and that was at stake. And getting there was a great victory.” 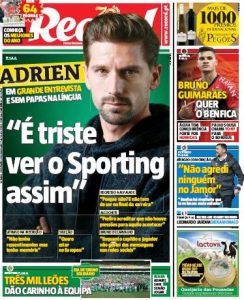 Asked if he still has hard feelings for that delay, Adrien said: “No, it’s over. It’s a story that remains for remembrance. There are good and bad. My career has been a rollercoaster. I have no hard feelings, but I have memories. Life decided to choose this path for me and no one said it would be easy.”

He was also quizzed if he thinks someone may have delayed his move to Leicester City on purpose, which is likely a reference to former Sporting president Bruno de Carvalho: “I don’t like to think that way. I always like to think of the positive things that can come from now on. I never think much of what happened of less good.”

Speaking of his loan move to Monaco last summer, Adrien was asked if it was his decision: “It was important for me to put everything on my side. Put everything in my hands, not to be sorry later. The opportunities that I deserved and were due weren’t emerging. There was a lack of regularity in playing time. And there is the Euros, which is back to the goals I set.”

Since most football players nowadays dream of playing in the Premier League, Adrien was asked if he felt the same way: “No doubt. And the truth is, I’m very happy to have done it.”