Liverpool and Porto have finally found an agreement for the permanent transfer of Marko Grujic, according to reports from Portugal.

Newspaper O Jogo today features a front page which says ‘Grujic is back’, showing that the midfielder landed in the city last night.

Grujic reportedly made the trip on a private flight, arriving at nearly midnight, and is apparently available to train with the Dragons today already.

It’s said the deal between Liverpool and Porto was reached late in the afternoon, and the player received orders to abandon the pre-season with the Reds.

O Jogo learned that this will be a permanent transfer, even though they didn’t manage to get the details of how much it will cost. 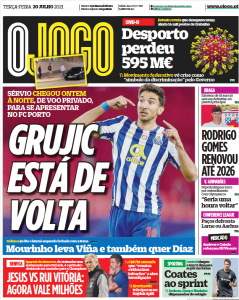 It’s claimed that at first, it had been agreed a loan with an obligatory buying clause of between €10m and €12m, but that isn’t confirmed.

Meanwhile, newspaper Record also has a big piece claiming Grujic is a ‘guaranteed’ signing for the Dragons.

Just like O Jogo, they claim the midfielder landed in Portugal last night and couldn’t have access to the price of the transfer, even though it’s believed to be a loan with an option to buy.

Both newspapers highlight the fact that Sassuolo were in the race for the player, but his wish to be back at Porto was crucial for a deal.