John Bostock ‘played’ for Tottenham from 2008 to 2013, but he never really played for the club.

The youngster was sent out on loans to Brentford, Hull City, Sheffield Wednesday, Swindon Town and Toronto and then released at the end of his contract.

That contract was the same one he’d signed when joining from Crystal Palace as the next big thing in English football. It was all clearly too much too soon and a sequence of events which the 26 year old now regrets.

Looking back on things, he’s told L’Equipe that he wouldn’t make the same choice again given the chance, and realises that it was the wrong decision.

Bostock went from being the darling for fans of the club he supported, to being despised by many of those same fans and having a huge amount of pressure on his shoulders.

He’s now at Toulouse, his twelfth club so far, and doing reasonably well, speaking to the French newspaper he explained he realises he made the wrong choice and that outside influences had been key: “At fifteen, you do not choose. The club wanted to keep me. But my agent, my family, people put a lot of pressure on me to leave. It was not my choice. There were different reasons I left, including the pressure of money. But I think I should have stayed there because I had chances to play. If I could go back, I would stay.”

It go so bad for Bostock after his Tottenham move that at one point he considered giving up the game completely: “I learned from my loans but it’s hard when you cannot find a place where you feel loved. Especially since my career was starting and everyone was 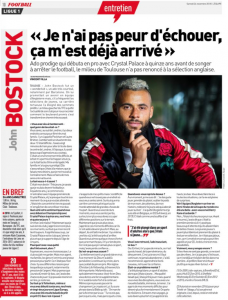 expecting great things from me. When you live hard times, you feel lost, especially if you have to occupy different positions in the pitch.

“Now that I’m older, I appreciate those hard times because they helped me become stronger. But, initially, they almost broke me. There was even one time I was close to stopping. When you love something so hard and it does not work, there is nothing worse. It’s not that I did not like this sport anymore, but I had lost confidence.”