Home Europe Midfielder says no regrets over decision to join Newcastle despite struggling with...
SHARE

Olivier Kemen left FC Metz for Newcastle United at the age of 16.

The midfielder spent two seasons with the Tyneside club’s academy before returning to France when Lyon took him in 2015.

Having struggled with the Ligue 1 side, he was released last year. This allowed the now 24-year-old to join second division French side Chamois Niortais in the summer of 2019.

Friday’s edition of L’Equipe has a detailed interview with Kemen, who makes it clear he doesn’t regret leaving Metz for the Magpies, even though it didn’t work out for him in England.

“My departure is not at all a regret, even if I did not have playing time at Newcastle. I had some great things in England that I wouldn’t have experienced with Metz,” he said. 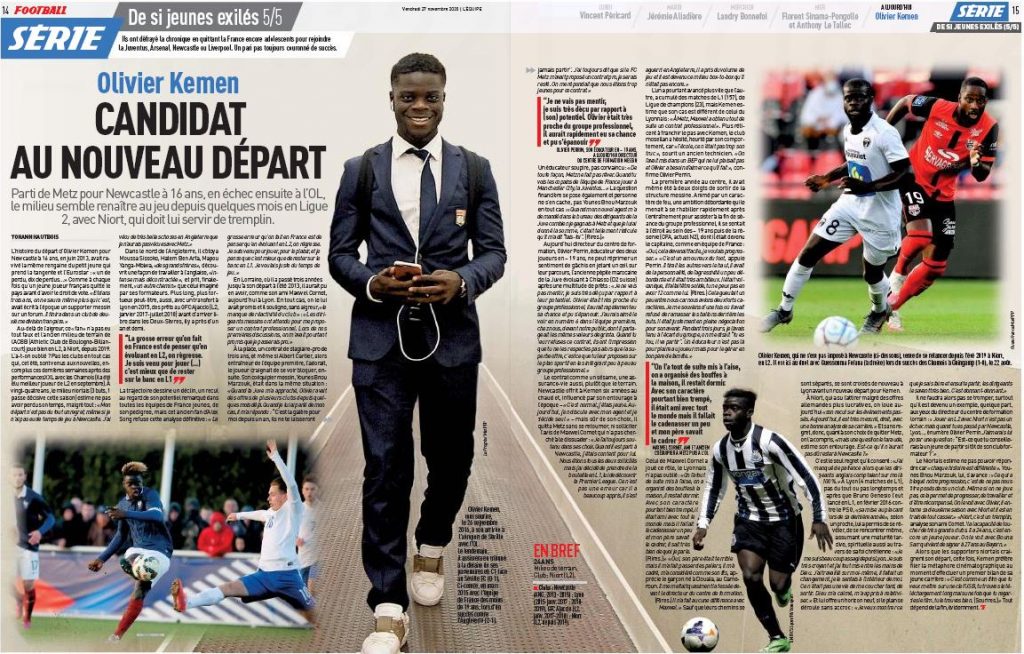 It’s claimed the current Ligue 2 player would have decided to continue at Metz had they offered him a professional contract. Instead, the French side offered a ‘three-year intern-pro contract’.

Kemen trained under the orders of Olivier Perrin at Metz’s academy and the coach is of the belief he should have continued at the club, instead of moving to Newcastle.

“I will not lie; I am very disappointed given his potential. Olivier was very close to the first team, he would have quickly had his chance and could flourish,” Perrin explained.

“I would have liked to see him at number 6 in the first team, at home, in front of our home crowd, with whom he shared the same values.

“When you deny them this contract, they get the impression that you are not respecting them, whereas the superb offer is what you are offering them on a sporting level by gradually integrating them into the first team.”

The newspaper states the contract was ‘key’ for him to pick Newcastle as they offered him a good deal and was also ‘influenced’ by those around him to join the English side. Kemen, however, regrets his decision to leave them and join Lyon in 2015.

“I ran out of patience as the English leaders counted on me 100 percent,” he stressed.