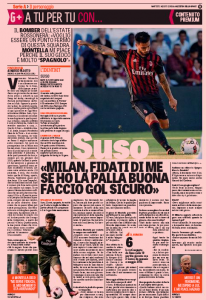 When Suso joined the Liverpool youth system, and throughout much of his time with the club, he was very highly rated indeed.

For a long time it seemed just a matter of time before Suso would be a Liverpool regular, and a player the club could say had pretty much come through their system.

However, by the time Suso left in 2015, it wasn’t a huge surprise. The youngster’s career hadn’t been moving as quick as everyone expected, and perhaps a change of scenery was best.

Again, things at AC Milan haven’t gone as quickly for Suso as he’d like, and speaking to Gazzetta dello Sport on Wednesday, the midfielder insisted he’s determined to make it a success.

As part of the interview, Gazzetta asked Suso if there are ever times he regrets leaving Liverpool and moving to Italy.

Suso explained he didn’t feel Liverpool’s contract offer was of the right level: “I was expiring, and their proposal to renew for me was not good. Certainly it was a special place, I got there I was a kid, it seemed like a dream. If I’m at Milan it’s thanks to them, however, I made the right choice in coming to Italy.”

The 22 year old has plenty of time to make a success of himself at AC Milan, but there have been rumours about a possible exit.