Contracted to Aston Villa for two seasons, Jordan Veretout technically was only there for one.

It was disappointing, with the Villains getting relegated, and instead of helping them fight their way back to the Premier League from the Championship, he looked for a loan away, which he got as Saint-Etienne welcomed him with open arms.

After that, he went to Fiorentina for £6m, and is currently at Roma on loan, where he is thriving under Paulo Fonseca.

Because of this, he sat down with L’Equipe for a catch up, where his time in England was inevitably brought up. 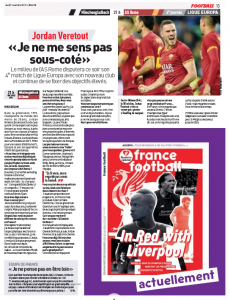 He’s spoken about it in the past, but this time it was a bit more positive, explaining what his transfer to Aston Villa did for him on the pitch.

He said: “In England, I worked a lot on the physical aspect as a box to box. The game they play is intense, you don’t get to think. In Italy is where I progressed the most, tactically, bringing the ball out. The manager at the time, Stefano Pioli, was very rigorous in that regard.”

The midfielder also revealed he did have the chance to return to England in the summer, as well as France, but he had decided to stay in Italy, where he is clearly enjoying himself these days.