First targeted by Watford, Adrien Tameze also saw Cardiff City turn up towards the end of the transfer window wanting to buy him.

The defensive midfielder eventually decided against moving to the Premier League, meaning the Bluebirds turned their attention to Leandro Bacuna, whom they signed from Reading for £3.1m.

Speaking to Nice-Matin this week, the 25-year-old was asked about his decision to stay in Ligue 1 and how he processed the news that a club in England wanted him.

He said: “I wasn’t expecting it. It surprised me that it happened so quickly. It’s nice to know that people are following you but I wanted to have a full season with Nice. I also wasn’t sure if I’d have a good relationship with another manager elsewhere.” 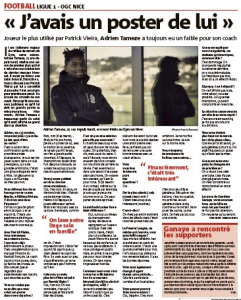 Revealing the wages offered were ‘far more interesting’ than what he is currently earning in the south of France, Tameze said his decision to stay was mostly down to his idol growing up, Patrick Vieira, who so happens to be his manager at Nice.

He explained: “It really made me think. I spoke to the manager about the situation. It was a first for me. He really helped me get back on track. He said the right things.”

Tameze arrived at Nice during the 2017 summer transfer window from Valenciennes, and has since made 62 appearances in all competitions, scoring one goal and picking up five assists.