Some years ago, before Wolverhampton Wanderers had a partnership with Jorge Mendes, there weren’t that many Portuguese players featuring in the Premier League.

That’s why their local media used to give a lot of attention to João Carlos Teixeira, who left Sporting to join Liverpool back in 2012.

The midfielder belonged to the Reds for four seasons. But despite having eight appearances for the club, he couldn’t convince at Anfield or at the sides he’s been at on loan, and ended up leaving England in 2016.

Teixeira later played for Porto, Braga, Vitória Guimarães and has now joined Feyenoord. And it’s this move to the Dutch side that he’s spoken about in an interview with newspaper Record today.

The outlet couldn’t leave aside his time at Liverpool, and the 27-year-old claims he leaves Portugal with a lot more experience this time.

“Yes… when I went to England I was 18-years-old. Now I’m 27, I am already a father and I have another maturity,” João Carlos Teixeira told Record. 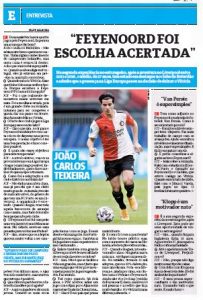 Regarding being called the ‘new Deco’ at the time he moved to Anfield, he was asked if this was something that harmed him.

“No, because I don’t really care about that kind of thing.”

João Carlos Teixeira was at Liverpool when Jurgen Klopp arrived at the club, and talked a little about his impact in his first year.

“He’s a super confident person and a natural motivator. He conveys everything he feels. He’s very good!”

On the move to Feyenoord and working alongside Robin van Persie, Teixeira claims to be really glad about how things have been going.

“They were the ones who really showed the greatest interest in me. It was the right choice, as it’s a great club in the Netherlands. We fight to be champions and I wanted to take a step forward.

“He’s very sociable and always in a good mood. He does more fieldwork with forwards. He helps them a lot in terms of movements and finishing, but he’s super simple. It’s easy to communicate with him.”