Marca have a very short and to the point article in their Tuesday edition on Tottenham and Pape Cheikh.

The Celta Vigo player is now said to be ‘very close to signing’ for Tottenham, with Marca presenting it as a matter of fact.

The Spanish newspaper say Celta Vigo have admitted they’re in negotiations with Tottenham for the transfer of Pape Cheikh, and say he’s been kept out of recent friendlies to avoid any injury which could prevent the Spurs move.

Celta Vigo seem willing to accept a €10m offer from Tottenham, say Marca, despite the 20 year old having a €30m release clause in his contract. 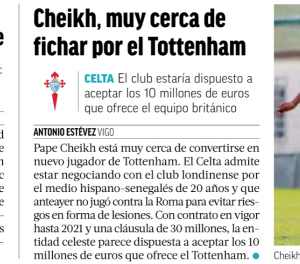 It all sounds very promising for Tottenham, and could be close to reality. What needs to be pointed out is that Marca’s claims are remarkably similar to others from Spanish radio.

Marca present the information as their own and don’t credit Cadena Ser or anyone else.

Wolves’ star Raul Jimenez on potential transfer fee – “They bought me for €40m, they won’t sell me for less”