Signed for just over £2m from Standard Liège in Belgium, Julien de Sart only ever made three appearances for Middlesbrough, who, for the most part, loaned him out to try and help him develop.

When it was clear that he didn’t have a future at Riverside, the young defensive midfielder was allowed to leave on a free, swapping the north of England for a return to his home country at KV Kortrijk.

Interviewed alongside Imoh Ezekiel by La Capitale over the weekend, de Sart looked back at his time with the Championship side, revealing he’s only got positives to take from it.

He said: “Going to Middlesbrough wasn’t a risk. The physical aspect wasn’t a problem even if I put on mass because the methods are different. The aim was to be champions before the end of the season so I could have a few games to show myself. Unfortunately, we were champions on the last day. 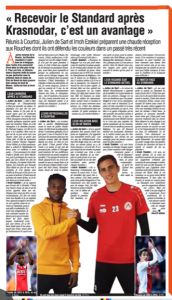 “In the Premier League, I was on the bench four or five times. My only regret was that I never got a chance when I think I was ready. With new players like Viktor Fischer or Alvaro Negredo, I was a nobody. Boro also bought De Roon for €15m in my role. That’s why I went to Derby.”

That’s when de Sart got a run of games under Steve McClaren, which then allowed him to get a loan to Zulte Waregem for a whole season, where there is some alleged frustration as to why he didn’t sign for them over KV Kortrijk.

He explained: “I heard that Francky Dury moaned a bit of seeing me here. I never got an offer from them and they had a year to buy me. Staying there was out of the question after the way they treated me.”

De Sart eventually signed for his new club for three years on the last day of the transfer window, going through a ‘great eight weeks of preseason’ with the Championship club, despite expecting to leave Middlesbrough in July.