It’s once again claimed the player could leave the Old Lady if a reasonable offer turns up for him. This time, the minimum price would be €30m, quite a profit given Juve signed him on a free transfer.

Although Manchester United had been pointed out as one of the main contenders to take Can out of Juve, they’re no longer seen that way.

Tuttosport writes that the Premier League side ‘have changed their decision’ regarding the signing. And the withdrawal also came from the player, who felt no need to spoil the good affection he has from Liverpool fans.

Can’s exit from Liverpool wasn’t great, and he’s not exactly regarded a hero, but moving to Old Trafford would certainly sour any connection there is. 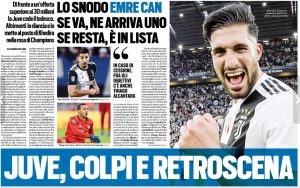 That’s why it would be more likely he goes somewhere else, with both Manchester United and the player discarding the option.

Paris Saint Germain are still in the race, although it’s claimed there’s no agreement yet, despite what’s been said. Meanwhile, Borussia Dortmund and Bayern Munich could bring Can take to his home country.