Marcelo Brozović is in his final year of contract at Inter Milan and has not signed a new deal so far, which has attention from other clubs.

Chelsea made contacts to find out the feasibility to sign the midfielder on a free transfer next summer, but the Blues were then joined by Newcastle United.

On October 14th, Tuttosport reported the Magpies will continue to monitor the 28-year-old’s situation, until there is a resolution.

After the Nerazzurri’s Champions League win over Sheriff Tiraspol, the Croatia international was quizzed about the renewal talks.

“Let’s see. We need to see what they [Inter] are saying in the next days. And, then we’ll see,” he said.

Tuttosport now explain there is still difference in what the player’s camp are demanding and what the Italian champions are willing to offer. He wants the wages to be raised from €4m to €6.5m per year, while Inter are offering around €5m, meaning the agreement is ‘still a long way as of today’. 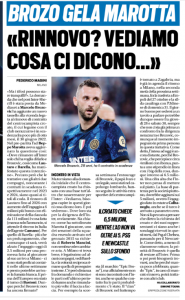 It’s claimed the reason behind this is because the midfielder and his entourage have ‘received an enquiry’ from Newcastle, among other clubs, namely Chelsea and Paris Saint-Germain.

However, Brozović is happy in Milan and unless there is a ‘sensational break’, his priority is to continue at the Camp Nou.

In other words, without a drastic change, it will be difficult for Newcastle or anyone else to take the player away from Inter.