Deadline day of the transfer window proved to be a busy one for Barcelona, despite the fact they didn’t do any actual business.

The Spanish giants were working on bringing Neymar back from PSG, and that would have met several players also departing, such as Ivan Rakitić or Ousmane Dembélé.

Another who seemingly had the chance to head to pastures new was youngster Carlos Aleña, with Canal Sur Radio (relayed by Mundo Deportivo) and Marca both saying he had an offer from Real Betis.

Canal say Betis were pushing hard for the Barça man in the final days of the transfer window but couldn’t get a deal done.

Marca back up those claims, explaining that the reason was Ernesto Valverde.

The Barcelona manager didn’t want to lose the 21-year-old, as he ‘maintains great confidence’ in him. 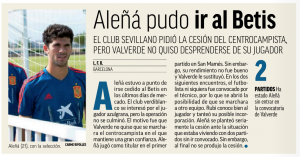 Canal believe there was more pragmatism to it than that, though, with Barça wary of letting Aleña go as they could have lost Rakitic and had already loaned out Rafinha this summer.

Both say Aleña was keen on the move, with Marca stating he ‘seriously considered’ it and Canal asserting he accepted the move and was ‘determined to accept’ the proposition.

A move never happened, though, and he was left fighting for a place in Barcelona’s very competitive midfield this season.