Following reports from the English media on Tuesday claiming that Tottenham Hotspur are interested in signing João Palhinha from Sporting, we get to see a big response from the Portuguese press today.

Nearly all local newspapers, and we are not exaggerating by saying that, bring a story about the midfielder. And most of them managed to get their own information about his situation with the Lions.

Let’s start with Record, who features a story saying Spurs have been showing their desire for the purchase of Palhinha. It’s claimed that Nuno Espírito Santo wants to have the player in England, even though he ‘knows the operation will be demanding’.

The newspaper writes the London side are currently analysing ‘all the necessary conditions’ to negotiate, and don’t want to spend over €20m for now. That’s said to be way below the price demanded by Sporting, who would like to negotiate the player for something close to his €60m release clause.

Since the Lions need to make cash this summer, it’s claimed there’s the chance of a negotiation for lower numbers with more performance goals to get closer to that total amount they’re expecting. 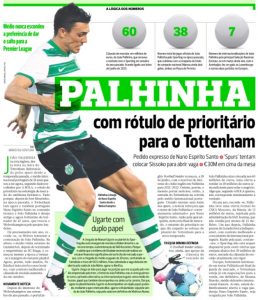 Now moving to newspaper A Bola, it’s claimed that Palhinha has been labelled as a ‘priority’ at Tottenham. That’s because the midfielder is an ‘old and now very strong wish’ of manager Nuno Espírito Santo, as the coach had already tried to sign him for Wolverhampton Wanderers last summer.

With reports from England saying €18m would be enough to take the player from Sporting, A Bola is harsh with their response, saying the claims ‘does not correspond to the truth in the slightest’. They say the Lions won’t even listen to offers of less than €30m.

Then we have a report from O Jogo saying Tottenham made ‘exploratory contacts’ for the signing following the approval of manager Nuno Espírito Santo.

The newspaper highlights the fact that Spurs aren’t alone in the race, since there’s competition from La Liga and the Premier League, as the player is followed by the likes of Manchester City, Manchester United, Barcelona, Atletico Madrid. His signing was also tried, with no success, by clubs such as Lyon, Lille, CSKA and Napoli.

O Jogo writes that Sporting ask for €60m, but since no club will pay that, the Lions’ need for sales could convince them to accept less. That’s why they’ve been negotiating for around €30m.