Midfielder Tiémoué Bakayoko says he ‘really wanted’ to play for Chelsea but got the impression things would not go how he wanted at the club.

Bakayoko joined Chelsea in a £36m move from Monaco back in 2017 but struggled in his first season at the club.

He was sent out on loan to AC Milan the following season before agreeing to a second loan this year, rejoining former club Monaco until the end of this campaign.

His second departure from Stamford Bridge came as something of a surprise, with many predicting that he could be given a second shot at his Chelsea career under Frank Lampard.

That didn’t prove to be the case, even though he desperately wanted to prove himself at the club.

“I didn’t immediately think it (Monaco) was the best option because I really wanted to play with Chelsea,” he told L’Equipe.

“But I felt that it wasn’t going to go the way I wanted it to and Monaco came along. It became a matter, of course.”

Bakayoko proved to be a significant disappointment for the Blues, having been seen as a big coup following his impressive performances for Monaco the year before.

Like many a player, he can consider himself somewhat unfortunate, with him not receiving much time to adapt to life in England and the Premier League.

A change in management and style after one year did not help either, but he believes he could have done more too.

“I played a lot in my first season of adaptation, contrary to what has been said,” he added.

“The second was to be the confirmation season, and there was this change of coach (Sarri’s arrival).

“There are also things I could have done better. Compliments are easy to hear. A good self-criticism is what makes you evolve. 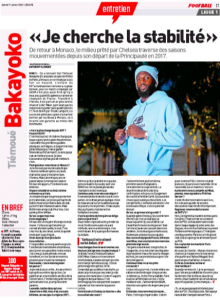 “When I leave Chelsea, I have a feeling of failure because it’s a club I loved.

“There was a trigger because I had gone through all the stages and it was like I had a break in my ambition.