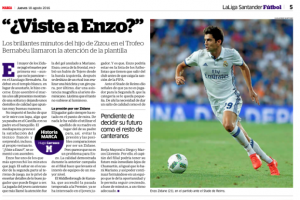 Enzo Zidane played so well for Real Madrid in their friendly against Stade Reims this week that Spanish newspaper AS rated him the best player on the pitch. That’s even more impressive when it’s considered Enzo only came on after 62 minutes.

The majority of Real Madrid’s stars were available and participated in the match, the majority for longer than Enzo, but the manager’s son was the one who shone brightest.

That has of course led to articles about the player, his development, and what could happen next.

Marca have an article in their Thursday edition, and say even Zinedine Zidane was impressed, saying excitedly to the players assembled in the dressing room: “Did you see Enzo?”

We managed to find a video of his performance on YouTube, excuse the music.

Enzo played for half an hour in an attacking midfielder role, drifting wide, usually to the left, when needed. He was very lively and certainly impressive, as he works to rubbish the inevitable suspicions he’s only there because of his dad.

It’s no surprise that Middlesbrough are mentioned, the only other club to be, and it’s stated Aitor Karanka is interested in taking the player.

The Middlesbrough links didn’t start off very reliably and seem to be based on the fact Karanka used to work at Real Madrid, Zidane has been around the place for years, and Enzo came through the youth system… so obviously.

Whilst that of course doesn’t mean obvious interest, it does mean that Middlesbrough could more easily build a deal if they wanted. There’s been talk of a loan, but surely the Premier League club would want a permanent deal, rather than nurturing the talent for someone else.