Middlesbrough are in talks with Bordeaux about a move for Martin Braithwaite in the current transfer window.

Girondins are looking to recruit a striker over the next week and L’Equipe report they’ve set their eyes on the Championship man.

Talks have already been initiated between Middlesbrough the Ligue 1 club, and whilst it seems the initial stages of that negotiation have been going well, and Boro are open to a deal, the nature of the transfer has yet to be agreed.

Middlesbrough want a ‘dry’ transfer report the French newspaper, which would see a clean, normal, permanent deal and the club completely end their relationship with 26 year old Braithwaite. 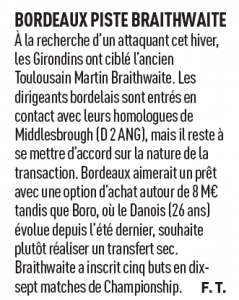 Alternatively, Bordeaux would prefer a loan move with an option to buy which L’Equipe put at around €8m.

Braithwaite only moved to Middlesbrough during the last summer transfer window, and has scored 5 goals so far in the current season. A used member of the squad, Middlesbrough would surely have to bring a replacement in.