AC Milan’s strong interest in Lucas Biglia is starting to become a bit of an issue for Lazio, and with the Argentinean midfielder publicly revealing he didn’t know if he would stay, the Serie A side are looking at possible alternatives.

While they’ve got an eye on their own league, a couple of players abroad have caught their eye, including Middlesbrough’s Marten de Roon.

The Dutch midfielder was signed by the relegated Premier League club last summer from Atalanta, and while playing well, was unable to stop Boro from returning to the Championship.

The 26-year-old now faces an important crossroads in his career: staying at the Riverside and try and help them go straight back up or moving to another club in one of the top league in Europe. 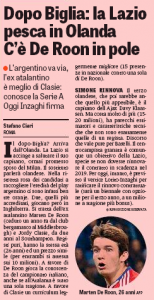 Gazzetta dello Sport on Thursday explain that De Roon’s knowledge of the Serie A from his successful season at Atalanta scores him a lot of brownie points, and could tip the balance in his favour over other targets, with the Italian newspaper putting him in ‘pole position’ for the role.

It remains to be seen whether Middlesbrough are willing to sell, but if they to recoup most of their £12m investment, they could very well consider it.