Even though the Mexican media provides big coverage of Raúl Jiménez’s steps at Wolves, they rarely have exclusive reports on his situation at the club.

That’s why it’s pretty interesting to see what Record brings today, as columnist Jonatan Peña has some inside information about the striker.

The journalist writes that Raúl Jiménez’s form at Wolves has attracted interest from clubs such as Arsenal, Juventus, Liverpool, Manchester United and Tottenham.

But that still doesn’t mean the 29-year-old is looking for the exit. It’s claimed that he likes living in Wolverhampton, where he’s just become a father, and plans to achieve more things at the club. 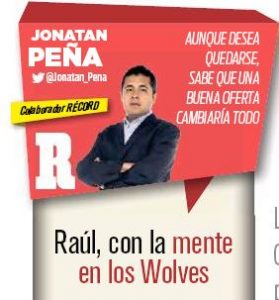 However, he also knows that anything could happen in football. A source close to the player spoke to Record, and talked about this double scenario.

“Raúl is happy in Wolverhampton and wouldn’t like to leave. As far as I’ve talked to him, he says he doesn’t come out. But it’s true that there is interest from great teams and for a great offer everything can happen.”

Record points out that Wolves paid €40m to sign Raúl Jiménez, and would like €80m to sell him now, as they’re not concerned about the financial crisis. It’s also said the club should receive some offers in the coming weeks.