Mexico has one of the biggest football cultures in the world. With several huge clubs and a big passion for the national team, the sport is very popular in the country.

So that the country’s most important sports newspaper today has a front page featuring Wolverhampton Wanderers’ 1-0 win over Bournemouth, means there’s more to it than just the result.

The newspaper brings four pages with a lot of information on the 29-year-old’s season and career. They also feature the opinion of 14 different journalists on him. 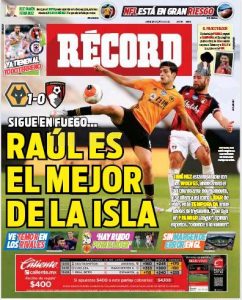 Besides José Ramon Fernandez’ column saying ‘we’re seeing the best Jimenez’, Record asked the other 13 journalists two questions: ‘What would be best for Jimenez’s future?’ and ‘Can we think Jimenez is already one of the top 10 strikers in the world?’.

There were a few generic answers about that first question, with very few of them saying the player should stay at Wolves. But most answers encouraged his departure from the club, and here are some of the most interesting of them.

“He should stay in England, so he doesn’t make the mistake of Chicharito to go to a club where he isn’t seen as he is: one of the best in Europe at this moment,” said Record’s director Carlos Ponce de Leon.

Record journalist Rúben Rodriguez wrote: “He must believe it. For me, it is better to continue in the Premier with a better team, although Juventus or Real Madrid are never told no.”

Felipe Morales, also from Record, agrees that Jimenez should stay in England: “If he moves, he’d have to move to another Premier League team. If he stays, let him be with Traoré. Raúl is the triumph of the binomial. He exists because Adama exists.”

And Fox Sports’ Raul Pollo Ortíz said Jimenez should sign for a specific club: “The best thing would be to find a team where he can start and aspire to important things, the ideal would be to go to Manchester United.”