Home Premier League Brighton Message sent out to Everton and West Ham: Transfer has to be...
SHARE

We’ve been expecting it, but here’s the confirmation. Despite Moussa Marega’s wish to leave Porto this summer, things won’t be so easy to take him from the Portuguese champions.

The news is from newspaper Jornal de Notícias today, who mention Everton and West Ham, and say the Dragons consider the player to be ‘untransferable’.

That means the obvious: any club who wants to sign Marega will have to pay to trigger his release clause, which currently stands at €40m.

With Marega having scoring 23 goals for the club this season, that’s the least we expected from Porto when getting the first approaches for him. 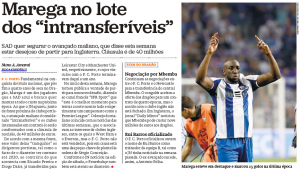 Yesterday, we’ve covered a story from A Bola saying Brighton were the first club to show interest in the striker for this summer market.

But the Seagulls are not mentioned by Jornal de Notícias today, who actually recalls that West Ham and Everton have been recently linked to Marega.

In any case, it looks like a matter of who will pay for the release clause first. Which nowadays, isn’t a big amount for a good striker.