Casper Sloth is today playing in a cup final.

Brondby are facing Silkeborg in the Danish Cup and Sloth has the confidence of his manager Peter Sørensen. Danish newspaper Politiken say the 26 year old Silkeborg player is finding his feet again after a difficult period in England with Leeds United.

Moving to Elland Road in 2014, Sloth feels he didn’t really get the opportunity to show what he could do, and his efforts were hampered by unrest at the club.

Speaking about his struggles with the Championship side, Sloth told Politiken: “I had 7 different coaches in the two seasons I was in Leeds. One of the 7 was only there for 26 days. It was a mess.

“I scored 3 goals in a 5-0 match and was out of the selection for the next. It wasn’t that I was doubting about getting my career back on track, but when you can’t get in the games, it’s not good at all. I was hampered by the adversity and have tried a lot. Now I’m at the right club.” 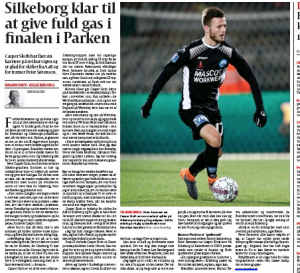 That’s not to say Sloth didn’t enjoy some of the aspects of his move to Leeds United, with Politiken saying he was happy at the start, when he was getting games, and relished playing in front of the Elland Road faithful.

Massimo Cellino was the man in charge when Sloth saw managers change so regularly, and it’s a little calmer at the club now.