With all the circus around Roque Mesa during the winter transfer window, one thing started to become apparent.

Mesa had wanted to move to Sevilla from Las Palmas last summer, but the Spanish mainland club didn’t want to pay the money needed. As soon as things started to go wrong at Swansea, there were claims in Spain that Mesa could be set for the move he wanted after all, but on loan in the winer window.

A war of words then started between Las Palmas and Sevilla, but it looked like Swansea had been used. Bigger Premier League wages, probably a nice signing bonus, and the opportunity to join Sevilla anyway.

Mesa went on loan and then in February it was reported Sevilla have a €7m buying clause, which is €5.5m less than what Swansea City paid less than a year ago.

At that point it already looked an absolute mess for Swansea, but it could get worse. Mesa has played a grand total of 72 La Liga minutes since his move, and whilst AS Sevilla report he’s set to get a few chances between now and the season end to prove his worth, it’s unlikely the club will happily pay the €7m. 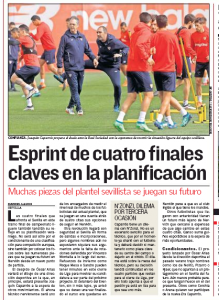 Sevilla have a certain reputation when it comes to these kind of deals and Swansea would likely have been pressed for a lower fee whatever the circumstance.

The buying clause was optional, meaning it only really benefitted Sevilla as they wouldn’t have to pay more than that fee.

With Las Palmas now relegated to Spain’s second tier, they no longer look an alternative option, and difficult times are ahead for Swansea’s negotiating team.