Well, in the space of 24 hours, everything changed at AS Roma.

It was announced that Paulo Fonseca would be leaving at the end of the season, which was swiftly followed by the official statement that José Mourinho would take over from the 2021-22 campaign onwards.

What this also did was change the targets the club would go for, especially in goal, going from Kepa Arrizabalaga when Maurizio Sarri was the favourite to the likes of Wolverhampton Wanderers’ Rui Patricio.

The reason for that is, of course, Jorge Mendes, who so happens to be the agent of both the new Roma manager and the Wolves goalkeeper.

Gazzetta dello Sport explain the Molineux resident ‘could be suitable for the Giallorossi’, although it’s made clear he isn’t the favourite, with that label associated to Udinese’s Juan Musso. 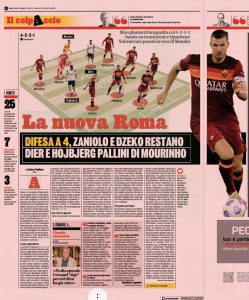 Roma are currently in a difficult situation at the position, and the belief is that it’s the most position they need to address the most.

We highly doubt Wolverhampton will be interested in parting way with their man, but we also know how powerful Mendes is when he wants to get a deal done, regardless of where his clients are.