It wasn’t only in Scotland that Rangers’ 1-1 draw against Hearts got a lot of attention. That the Ibrox side lost the top of the table to Celtic had big coverage in Portugal as well.

The local media has been building up ahead of the Europa League clash between Porto and the Glasgow side, and took the weekend’s result as a sign that Steven Gerrard’s team could be a bit weaker for Thursday’s match.

But there’s someone who disagrees with that, and that’s Pedro Mendes. The former midfielder, who’s played for Rangers between 2008 and 2010, says they are going to Portugal in great form.

“Rangers are fine. They’re leading the league and in the group stage of the Europa League,” Mendes told A Bola, saying Gerrard is doing “a great job, with a mix of experienced players and very young players.”

“This year they have a good chance of becoming champions again. Either them or Celtic, because the fight is practically between the two, but Rangers are stronger.” 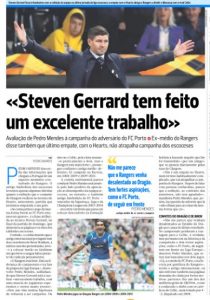 “I don’t think they are discouraged at the Estádio do Dragão because of the last result. In the league they lost the lead to Celtic, it’s true, but they remain at the top of the competition and have strong aspirations, like FC Porto, to move forward in the Europa League.”

Mendes had a short spell at Porto between 2003 and 2004. So since he’s played for both clubs, he’s been invited by them to watch the games in Lisbon and Glasgow.

Earlier today, we also covered an interview with Daniel Candeias, who named said Porto need to watch out for Alfredo Morelos, Jermain Defoe and James Tavernier.