Around three weeks ago, Corriere dello Sport’s local Naples edition dedicated a whole page to a rather big, and perhaps bold, claim that Wolverhampton Wanderers could end up with Vinicius.

We aren’t talking about the Real Madrid starlet, but the Brazilian target man, whom Napoli sent on loan to Monaco for the second half of last season.

While hardly the most prolific during his stint with the principality club, the forward did have his uses under Leonardo Jardim, and he returned to Napoli with a slightly better reputation than when he’d left.

However, to jump from that to a €20m+ deal to Wolves in the Premier League was quite impressive, yet that’s what they said. 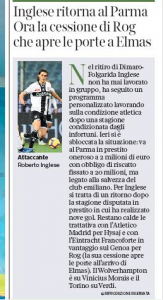 Jorge Mendes was, of course, involved in this reported deal, but we haven’t seen much from it since, at least not until very recently.

Whether they are just regurgitating the previous report a few weeks later to keep it alive or acting on new information isn’t stated, but Corriere del Mezzogiorno brought it back on July 11th (we missed it), claiming the powerful agent ‘could push Vinicius Morais towards Wolves for a fee close to €22m’.

This was then reiterated on Monday by the same outlet, where this time the whole claim was flipped, reporting it was Nuno Espirito Santo’s club who were after the 23-year-old.

To us, it sounds like they’re just pushing a story in hope it sticks after a few weeks of it having gone quiet, but if there’s any more updates on the matter, we’ll do our best to provide them.