Home Europe Mendes looking to divert player away from Wolves – Could be blow...
SHARE

The summer transfer window may be an enjoyable time for most football fans but for agents, it’s like Christmas.

It’s the period of the season where they earn their money, ensuring that their clients get the best move possible, most of the time anyway, and they get a nice paycheck as well.

Jorge Mendes is one of the biggest in the business and it seems he’s determined to ensure his latest client earns him good money this summer.

Correio da Manhã reports that the Portuguese agent has signed up Lille’s Rafa Leao after the youngster left his previous representative Nélson Almeida over issues about missing funds.

And that signing has suddenly put Leao in the viewfinder of several clubs, including ‘sharks’ such as Juventus, Inter Milan, AC Milan and Wolves.

The La Liga side were at the front of the race, though, having offered €35m to take Leao to the Mestalla this summer and that should spell bad news for the other interest parties.

Everton and Wolves are particularly interested parties, we’ve covered Everton’s interest extensively, but the newspaper reports Mendes is planning to send him to Valencia. 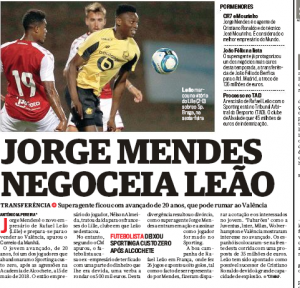 Leao head there if the interest is genuine.

It’s debatable if Valencia need Leao or have €35m to spend on him though. They’ve already signed Maxi Gomez this summer and have Rodrigo as well so they’re not short on options upfront.

Perhaps if the latter leaves this one picks up more pace.