Roma’s mission to sign Chris Smalling from Manchester United has well and truly begun this week, as a couple of Italian newspapers report some movement from both sides to set up some meetings.

We’ll start with Gazzetta dello Sport, who mostly relay an interview intermediary Tiziano Pasquali had with NSL, and the general idea is the Old Trafford side want €20m while the Serie A club only want to pay 15.

Despite what has been previously reported, like the fact Smalling had urged his agents to get a deal done because he wants to stay, the defender has yet to give a definitive answer on his future, and that’s completely understandable.

After all, it’s a big decision, and there’s still so much of the season left to play, but that doesn’t mean the two clubs can’t get a deal sorted behind the scenes should the 29-year-old (he turns 30 on Friday) decide to remain in Italy. 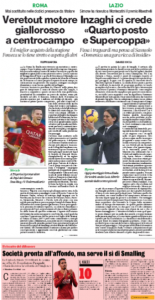 Gazzetta say ‘meetings are scheduled between Roma and emissaries of the English club this week’, while Il Tempo reveal Smalling’s agent ‘arrived in Rome’ on Monday where he will ‘talk with the player and sit down with the club’s director of football on how to carry out the negotiations going forward’.

This could be an important week for Smalling and Manchester United, so we’ll make sure to keep you updated throughout on what’s being said in Italy.