Despite going a bit quiet over the end of year festivities, Angelo Ogbonna to Bologna has yet to disappear entirely, and, if Corriere dello Sport on Wednesday are to be believed, it could come back in a big way.

Managerial issues aside, the Serie A club remains quite an attractive destination for the defender, who is said to be happy to make the move and return to Italy, but a lot needs to be done before anything takes place.

We’ve already covered how his wages and whatever fee West Ham ask for could make things difficult for Bologna, but that isn’t stopping them.

Once again, the interest is described as quite important from Riccardo Bigon, the club’s director of football, and Corriere reveal a meeting is expected to take place ‘in the next few hours’ to try and work out the possibilities. 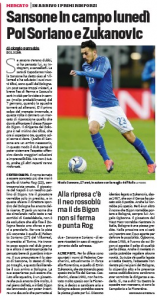 We’ll have to wait and see what comes from said encounter, but our guess is unless the player agrees to a considerable wage cut and/or West Ham say yes to a loan with a view to buy next summer, a January move will be very difficult to pull off.