It’s not really a transfer window if Loic Remy hasn’t played a major part, so we were relieved on Thursday to see him back in the rumour mill.

France’s Le10 Sport who can be, how shall we say this, excitable, reported Watford were close to agreeing a deal to sign Remy from Las Palmas on loan with a view to buy at the end of the season.

They even said it was expected to be ‘made official soon’, and sounded quite confident in their claims. There’s still time for all of that to be correct, but over in Spain they have it a little different.

Marca cover Remy in their Friday edition and say there’s a meeting today between the player and Las Palmas, at which the Frenchman will present the offers he’s managed to collate for himself and ask if he can leave.

Las Palmas have likely already packed his bags, they’ve made it clear they want to see the back of the 31 year old. He hasn’t done too badly, with 5 goals from 6 starts and 6 substitute appearances, so wages probably play a part. 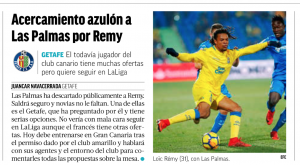 Should Watford interest be genuine then today could be pivotal, and Marca believe Getafe are interested too.

This could be one which goes down to the wire, and who would rule out Remy turning up at Watford at 10pm on deadline day?