Loaned by West Ham to Fiorentina for the season, Edimilson Fernandes’ future at the London Stadium has yet to be determined, as the Serie A side still have the option to make the deal a permanent one before June 30th for around €8m.

Covered in detail by members of the Italian press since January, the Switzerland international’s situation in Florence has been a bit confusing, with some claiming he will likely return, while others believe he might have done just about enough to earn himself a stay.

That was all under Stefano Pioli, but since the former Inter manager’s departure and Vincenzo Montella taking over, Fernandes hasn’t played, not because he hasn’t been good enough, but because he’s been injured.

Now back, Montella will have a decision to make prior to the weekend as Fiorentina face Juventus away. 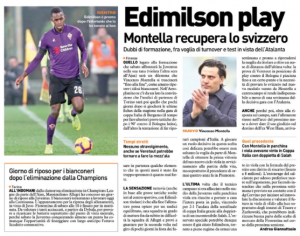 Fernandes now has around a month to convince his new manager that he should be kept around for next season, as the 44-year-old, according to La Nazione, will need to let his board know if he has plans for the Swiss midfielder going forward.

Down the player’s end, his entourage ‘prefer to keep quiet’ ahead of a planned meeting next week with Fiorentina’s director of football, Pantaleo Corvino, where they will evaluate the player’s season and get a better idea of what his future holds.

It seems we’ll know more after Easter. West Ham are probably keen to know too.