Benfica are now very much in the battle to sign Rafael Camacho from Liverpool.

The youngster has been linked with a number of clubs as he hopes to leave the Reds this summer, and Record reports Benfica will hold a meeting with the player’s representatives ‘in the coming days’.

At this meeting, a proposal will be presented to the player. That will likely include a plan for his progression with the Lisbon side, and then an offer for personal terms.

Then it will be down to convincing Liverpool, and the Portuguese newspaper says it’s not entirely clear whether Benfica will try for a loan or permanent transfer. 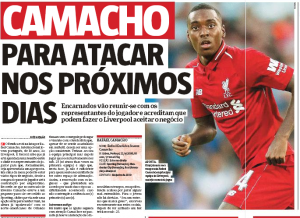 Given Camacho only has another season left on his Liverpool contract, it’s clear a loan would require an extension, something the player may not be prepared to do.

He almost moved to Sporting in the January window, with Record saying all the details of a deal were agreed. But then Jurgen Klopp ‘vetoed’ the transfer and promised Camacho he’d be more involved in the coming months, something which hasn’t happened.