It’s been reported countless times in the Italian press that Perisic has agreed personal terms to move to Old Trafford, with the figure usually put at around €6m.

Tuttosport use that figure in their Tuesday edition, and it’s worth noting that in Italy footballer’s wages are usually quoted after tax.

As time drags on, Tuttosport say Inter Milan can’t wait indefinitely for Manchester United to make an acceptable offer. Whilst no deadline has been set yet, it’s explained Inter need to look to the future and try and keep Perisic happy if his dream transfer fails.

The player’s agent Fali Ramadani is set to meet with Inter, and of course the first task will probably be to push for a transfer, but if that’s not possible then Perisic’s agent will ask for a renewal close to the €6m agreed with Manchester United.

Inter won’t be matching that figure, so will try to come to a compromise.

Perisic is on a contract until June 2020, so there’s not much power for the player. So far this summer his greatest form of protest has been to edge out of Inter Milan team pictures, and it’s not really shaken Italian football. 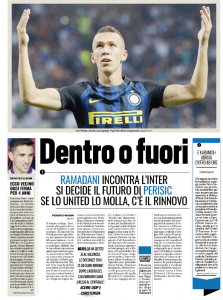 This one is at a stalemate. Perisic playing well in preseason will have underlined to Manchester United why Jose Mourinho wants him, as well as shown Inter what they’d be missing if they sold him.

It’s worth pointing out that no new Manchester United offer has been claimed, or even suggested, for a while.

Tuttosport headline their Tuesday article ‘In our out’, and Inter want to resolve that with Ramadani.