Joel Campbell may not be one of Arsenal’s biggest stars, but his name is part of something huge in Portugal today.

On Thursday, it was already said Sporting were in contact with the Gunners to check the conditions for a loan, and now it seems the deal is done. 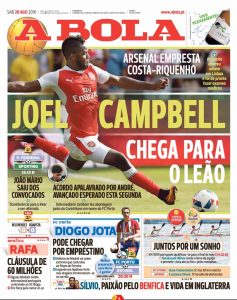 O Jogo, A Bola and Record are all confirming the transfer, with the latter two making it the big story of their front pages.

The player reportedly arrived in Lisbon on Friday night and immediately had his medicals. Despite Campbell having accepted to drop his salary, Arsenal will still pay for a part of it.

Record say the 24-year-old was convinced to accept the move by the former Fulham player Bryan Ruiz, who is his Costa Rica teammate and told him good things about Sporting’s project.

Campbell, who’s been wanted by Jorge Jesus since the manager’s time at Benfica, is considered to be a great addition to Sporting’s squad since he can play in many attacking positions.

According to Record, the one-year loan will include an option to buy for €10m.