On June 24th, we carried a report from Het Belang van Limburg, who claimed Genk and Brighton & Hove Albion have agreed a deal for Leandro Trossard.

It was explained the Seagulls will pay €20m to the Belgian club and they then had to agree personal terms with the winger for the deal to take shape.

His agent Josy Comhair had held talks with the Premier League side on Sunday, but left the meeting without finding an agreement over personal terms for his client.

Another Belgian newspaper, Het Laatste Nieuws, now claims the 24-year-old reached an agreement over personal terms with Graham Potter’s side on Monday.

The player is expected to fly to England with his representative today and will undergo medical tests before completing his switch to Brighton. 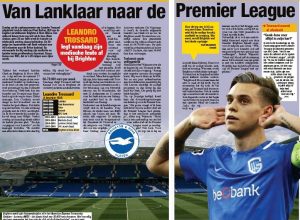