Manchester City midfielder Ilkay Gundogan has insisted they are not concerned about Liverpool closing the gap in the Premier League title race.

City currently sit top of the table after 27 games with 66 points to their name, six more than Liverpool in second place.

Pep Guardiola’s side had enjoyed a more commanding lead earlier in the campaign, with many believing the title race was done before the turn of the year.

That has not proven to be the case, though, with a difficult January for Manchester City giving Liverpool the chance to close the gap.

They’re now only six points behind, have a game in hand on City and are in a fine run of form compared to their rivals.

The title fight is very much on, particularly given Liverpool are set to travel to the Etihad to take on Manchester City on April 10th.

Gundogan, though, insists he and his teammates are not concerned about Klopp and co chasing them down, and it’s just the nature of the game. 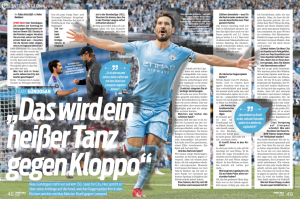 “What do you mean by fear?” he told SportBILD when asked if there was City fear around the title race.

“For the league, it’s extremely exciting and good. The good thing for us is that it’s not an unfamiliar situation.

“It’s like two years ago, so we should be able to handle the pressure Liverpool are trying to build. We know that we have a very strong team, extremely good players.

“And that we are still playing against them at home. Everything is open: It will be a hot dance. But that’s what we play football for!”