Christophe Galtier initially tried but ultimately failed to hide his annoyance on Thursday when asked about Tottenham taking two of his coaches to assist Jose Mourinho.

The Portuguese manager had been welcomed into Lille this year and was clearly impressed with what he saw, signing up both Joao Sacramento and Nuno Santos.

Galtier sarcastically called Mourinho’s actions ‘classy’ and made clear he’s unhappy with the way things have been done.

Santos is a goalkeeping coach and enjoyed a very close relationship with Mike Maignan, and L’Equipe quote Galtier as saying: “I think there was a lot of respect, consideration of on the side of Mike.”

The French newspaper suggests the comments mean that wasn’t reciprocal, ‘unless’ there’s a plan for the two to reunite at Tottenham.

On that prospect, Lille’s Jose Fonte is quoted as saying: “Mike had a very good relationship with Nuno, he did a great job last year, but the truth is he’s gone. Now you have to focus, work with Grégory (Wimbée). For Mike, it’s important to have a good season. When you see Nuno in Tottenham, maybe there’s going to be a possibility, if he’s going to have a very, very big season, to join him there.” 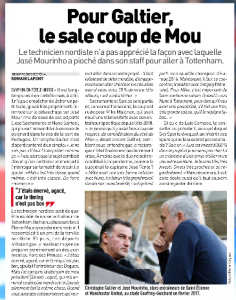 Mike Maignan is 24 years of age and has represented France throughout the youth levels, already being called up for the full national squad.

His contract with Lille lasts until June 2022, and perhaps he could be an option if Spurs are looking for a long term replacement for Hugo Lloris.