Home Europe Maxi Gomez’s transfer is ‘about to close’ – And it’s not to...
SHARE

West Ham United’s chances of signing Maxi Gomez appear to be decreasing by the day, and unless anything dramatic happens, it looks like Manuel Pellegrini has lost out on the Cetla Vigo player.

On Monday we covered a report from Celta’s local media which explained talks had reopened with their La Liga rivals. Valencia had long looked the likeliest destination, and it’s been claimed multiple times that Gomez already has a personal agreement with the club.

However, the difference between valuations had caused talks to collapse, giving some hope to the Hammers.

Now they’re back on and look to be going well. Tuesday’s edition of Marca reports the player’s transfer to Valencia is ‘about to close’ and they say both clubs want the deal sorting out this week. 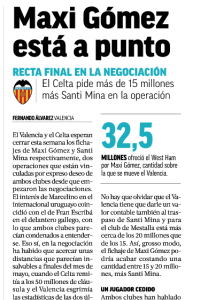 Santi Mina would be going the other way, along with around €15m and potentially another player as well.

West Ham being willing to pay €32.5m is covered, yet it’s not thought, by Marca at least, that there’s a big danger for Valencia right now.

The Spanish club finished fourth in La Liga and therefore have a Champions League challenge ahead of them.