There’s still confidence in the Italian media on Ashley Young moving to Inter Milan during the winter market.

The story built so quickly last weekend that at one point it was stated Inter hoped to have Young in the stands for their match against Atalanta on Saturday, which ended in a 1-1 draw.

Monday’s edition of Gazzetta dello Sport reports it’s a ‘matter of days’ before the Manchester United player moves to Italy. He’s considered to be the signing Inter are currently the closest to completing, and ‘all the ingredients’ are there for the move to happen.

‘White smoke’ is expected on the switch between Wednesday and Thursday, and Young will sign for 18 months on a salary of €3m a year after tax. 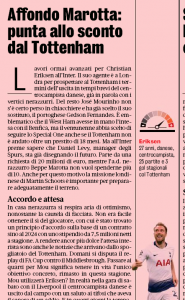 Manchester United now have to give the ‘green light’ for the move to take place and, as far as Gazzetta have it, Inter don’t feel there’s going to be any problems in that regard.

It’s once again stated Inter may have to pay a ‘minimal’ compensation fee to the Old Trafford side, although no figure is attached to that.