Junior Firpo to Leeds United may drag on a little longer than had seemed the case a couple of days ago, suggests Thursday’s edition of Mundo Deportivo.

The Catalan newspaper report the Premier League club and Barcelona are finalising the last details of the transfer, and they put the fee at €15-18m.

Most reports have stated Leeds will pay €15m, and it may be that the Catalan media are trying to edge that €18m figure out there so supporters don’t think a loss has been made on the player, given Real Betis were paid €18m.

Mundo Deportivo state they’ve spoke to sources at both clubs, and been told by both that talks remain ‘advanced’ for the move to happen. The newspaper often speaks to Barcelona sources, and it would be assumed their line at Elland Road may be connected to Victor Orta, who they once again credit with masterminding the deal. 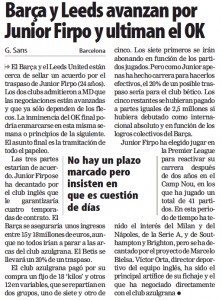 There doesn’t appear to be a great rush to get the deal finalised, with it stated that should happen either this week or rolling into the beginning of next.

The report states there’s no deadline for completion, although it should be a ‘matter of days’.